CANADA ONLY. This license is good for a one-time free admission, non-broadcast, public exhibition screening of THE GRIZZLIES to an audience.

Digital license orders are processed manually. You will receive your streaming link and login password in 3-5 business days.

Exclusively available in Canada, this community screening license includes the rights to show the full feature-length version of The Grizzlies one time, to a public audience. In this inspiring true story, a group of Inuit students in a small, struggling Arctic community are changed forever through the transformative power of sport.

THE GRIZZLIES is based on the inspiring true story of a group of Inuit students in a small Arctic town that had one of the highest teen suicide rates in the world, due to a history of residential schools, and intergenerational trauma. The classmates are initially resistant when the naive and culturally ignorant white teacher from the south introduces them to lacrosse—but gradually, as they begin to connect with each other as teammates, the students’ find inspiration to make profound shifts in their lives.

Together as “The Grizzlies”, the players learn to lead each other, gain the support of a deeply divided town, and look to compete in the National Lacrosse Championships. The students’ ultimately discover that success doesn’t lie in the outcome of a lacrosse game, but instead in their awakened spirits and the awareness that even in the toughest of circumstances there is always the possibility of transformation and hope. THE GRIZZLIES is more than an inspiring sports drama as it is set in one of the most unique places on earth, starring fresh, young actors in starring roles. Unlike many sports/coach/inspiring teacher films, THE GRIZZLIES is not just a story about a teacher who affected his student’s lives – it is a true story about a group of Inuit students who changed their teacher and eventually their whole community for the better.

Sign up to The Grizzlies newsletter for news and special offers. 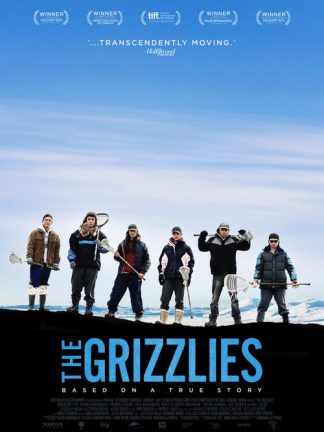